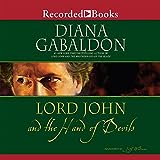 Eighteenth-century Britain forms the backdrop to a trio of adventures featuring Lord John Grey as he sets out to avenge a murder victim, becomes caught between an enemy army and a mysterious night-hag, and confronts a traitor and a ghost.