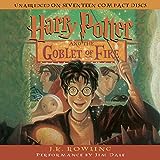 Sequel to: Harry Potter and the prisoner of Azkaban.

Sequel: Harry Potter and the Order of the Phoenix.

Fourth in the Harry Potter and the sorcerer's stone series.

Harry Potter, a fourth-year student at Hogwarts School of Witchcraft and Wizardry, longs to escape his hateful relatives, the Dursleys, and live as a normal fourteen-year-old wizard, but what Harry does not yet realize is that he is not a normal wizard, and in his case, different can be deadly.